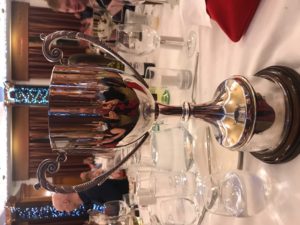 The view of the trophy at the end of the social.

After some concern that the club was under threat of losing the top club award at the Scottish, a fantastic team effort resulted in the club dominating the event once again  – winning the trophy with more than double the points of second placed Warrender Baths Club (807 points to 391 points).

Great team – and pretty too!

There were many outstanding performances from SCB members, most notably from Martin Snape, Peter Long and Audrey Cooper who all broke Scottish records:

The Scottish Masters’ decathlon awards were also made at the post-meet social event with Audrey Cooper finishing 2nd in the female section and Ian 3rd in the Male.

Of course, we didn’t forget to have fun! 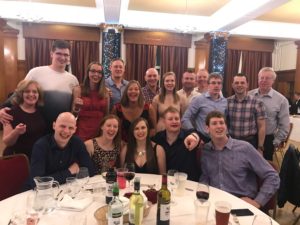 Dave doing his Trump pointing for the camera trick 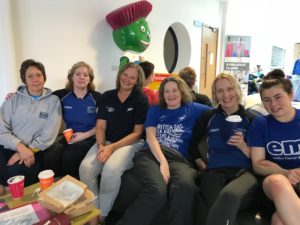 The club trains at four pools, Bucksburn, Tullos, RGU sport and the new pool at ASV. Sessions are both long course and short course.

As well as training the club has a very active social life with events ranging from meals out, pub quiz's, theatre trips, christmas dinner and BBQ's.